Complex intestacies: Why you should leave a Will

At Kings Court Trust, we deal with a variety of different estates and we are sometimes faced with complex intestacies when someone dies without a Will. In this blog post, we share two particularly complicated case studies where family tree research has been required to identify the entitled heirs, all of which could have been avoided by leaving a Will.

Case study one: The importance of family tree verification

The video below summarises this case study – watch now and read on for the full, detailed story.

We were instructed on an estate where the deceased died intestate (without a Will) at the age of 81. There was no surviving spouse so it was believed that everything would be left to the three surviving children; Kings Court Trust’s client and his brother and sister.

As the deceased died without a Will, it is best practice to reconstruct the family tree to ensure only those who are entitled inherit. Thorough genealogical research is the only way to ensure you are distributing to the correct beneficiaries. The Administrator(s) of an estate is legally and financially responsible for the correct distribution and any comeuppance will fall to them, so it’s incredibly important to only pass an inheritance to those entitled. By making a clear, well-written Will, this often complicated process can be avoided.

We proceeded to reconstruct the family tree and from our investigations into the family, it transpired that there were two further children, in addition to the three children that we had already been aware of. One of the children discovered had pre-deceased leaving behind two children, which made them beneficiaries.

The research showed that the other child discovered was born three months after his parents married. His siblings believed that he was a half-brother and that the deceased was not the father. This youngest son had moved to Australia and lost contact with the family. The records showed that he hadn’t been adopted by the deceased, so we obtained his birth certificate and discovered the deceased was named on the birth certificate as the father. Further investigation confirmed that the son had pre-deceased, leaving behind four children. We discovered that two of the youngest son’s children had also predeceased but one of them had two children that were alive.

This estate that at first appeared to be straightforward and would be distributed equally between three children, must now be distributed to nine beneficiaries. The three living children will still inherit but they will have to split their inheritance among four nephews/nieces and two great-nephews/nieces (the deceased’s grandchildren and great-grandchildren).

Our client now must share his inheritance with nephews and nieces he has never met. This case study highlights the importance of family tree research to ensure the right people inherit. Additionally, it shows how much more complicated the estate administration process can be if you don’t leave a Will. As highlighted in this example, under the intestacy rules, relatives that the family may have lost touch with can inherit, which can often lead to family disputes. 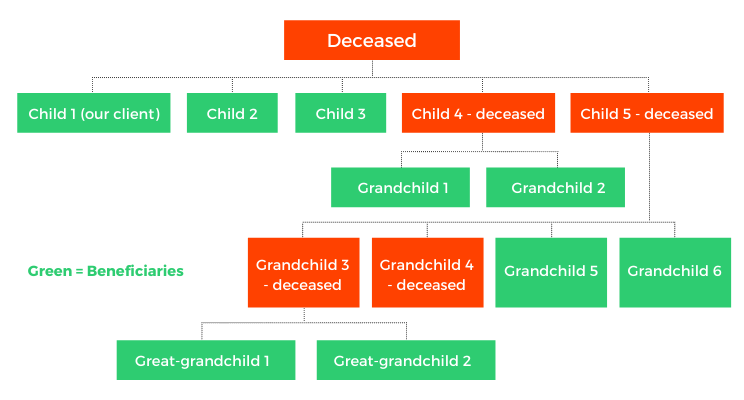 Case study two: Who inherits the estate when there are no known relatives?

The video below summarises this case study – watch now and read on for the full, detailed story.

A single man’s friend from overseas hadn’t heard from him for a while and he was aware there were no family members, so he called the police who attended and found the man had died at his home.

The 57-year old deceased had left Northern Ireland when he was 16 and lost touch with all his family. He did not leave a Will so his estate falls under the rules of intestacy. Family tree research was therefore required to find out who was due to inherit his estate, especially as there was not a clear picture of the family makeup.

Firstly, a cousin was discovered who had also left Northern Ireland with the deceased when they were both 16 and he instructed Kings Court Trust to administer the estate. The cousin couldn’t provide much information, so we started to conduct our research in Northern Ireland.

We started by verifying that the cousin, our client, was related to the deceased and entitled to inherit. However, at first, it was not clear whether he was related as he didn’t appear in our research. We then checked his birth certificate and found that he hadn’t appeared in the research as his mother’s name was listed as Claire on his birth certificate, although her correct name was Clara. Additionally, we found our client’s sister that we were unaware of from checking records for Claire. It is common to come across issues with names being incorrectly transcribed on records, which highlights how important it is to ensure expert genealogical researchers are used. They can identify issues like this and ensure there isn’t a misdistribution.

From our research so far, we have found 11 cousins in total and the research will continue until we have completed the family tree. We must verify every family member to ensure we have found the correct people and they are due to inherit.

Although the deceased had no relationship with his cousins, they are now set to inherit his entire estate as he had not outlined his wishes in a Will.

The COVID-19 pandemic and the closure of the registries in Northern Ireland have made the research even more complicated and time-consuming. All of which, could have been avoided with a well-written Will.

These case studies highlight the importance of leaving behind a well-written and valid Will, which can make the estate administration process clearer and more straightforward. This can often prevent unnecessary stress for loved ones at an already difficult time. If a valid and up-to-date Will has been left, there is a clear outline of how the estate will be distributed, identifying beneficiaries and exactly what they will be inheriting from the estate.

Kings Court Trust is an award-winning probate and estate administration provider that can take care of any estate from simple to complex. We are experts in estate administration, so we know how to handle any situation, allowing you to leave an estate in our safe hands. If you’re trying to work out the next steps following a bereavement or have any questions about the estate administration process, get in touch with us by calling 0300 303 9000 or email ClientServicesTeam@kctrust.co.uk.